To demonstrate the potential benefits of occupancy sensors we deep dive on underground car parks in tis article.  If you’re designing an apartment building and you’re stuck with an underground car park things can get pretty nasty with energy consumption.  With no natural light and a clear safety requirement to keep the area lit all things point to an energy hungry lighting solution.   Even the most efficient lamps will still burn a lot of power running 24 hours a day, 365 days a year.

The most obvious solution to reduce energy consumption is reducing run time with lighting controls.  Specifically motion sensors.  But how should these be set up, and how does the set up (number of lamps per sensor and lamp shutoff delay) actually effect the energy savings the controls will achieve?  The short answer is, make sure they turn off really quickly after the car or person is out of the area.  The long answer is below:

The interplay between the car park layout, vehicle traffic, pedestrian traffic, simultaneous use of certain areas of the car park, probability of a specific car bay being accessed, the shut-off delay timing and the distribution of sensors means calculating light run time is very complex.  Pondering the possibilities got the better of me and I ended up running a simulation to determine effect of some key parameters.

The conceptual car park looked like the below.  Effectively 150 bays with one pedestrian access and a main vehicle exit point at one end. 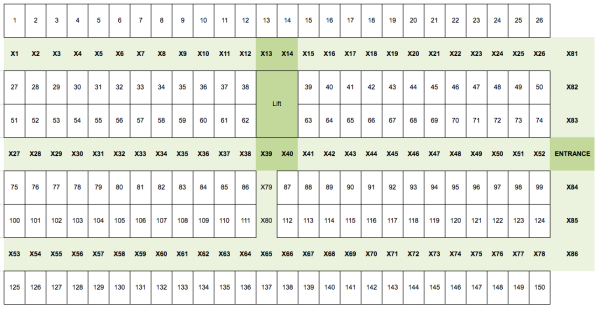 I used some basic lighting design to work out how many lights would be needed (single globe T5s) to achieve an adequate light level (50lx).  The calcs indicated a requirement of about 80 lamps.  I just placed these in the road ways and walk ways in my conceptual design.  These are the numbers with the x in front of them.  In reality they’d be probably be spaced more evenly but this satisfies the requirements of the model which is just to see how many lights would be triggered when each bay was accessed.

Which Car Bay Triggers which Lamp?

This was a manual process of thinking about how a person will walk from the lift to the car, and then how they will drive out (or vice versa).  The below diagram shows that if car bay 125 is accessed the blue line will be traversed by the car driver and passengers, whilst the red line will be travelled by the car.  All the lamps highlighted in red will subsequently need to fire. 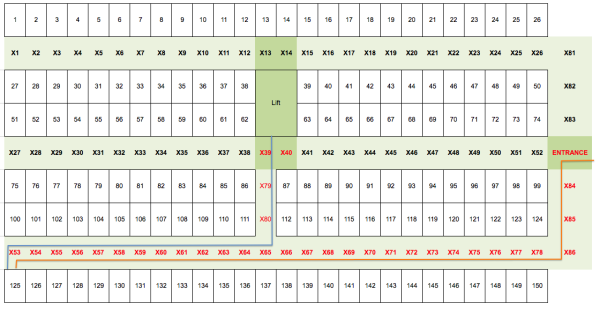 I got some stats on how many trips and average household does from here and here.  The Sydney data also gave these neat graphs on when the trips occur as well.  This enabled me to put a probability on a given car being accessed at a certain time of the day.  The sensors are obviously going to give the most benefit during lower trip frequency times.  But depending on the set up, you can even get a reduced run time during the peak times in this car park (not every day, but some days there’ll be savings due to the random nature of when people take a car trip).

After some sense checking I ran the simulation for different combinations of motion sensor parameters.  The focus was on:

The below chart shows the results.  It looks pretty clear that the most important attribute is the delay before the lights are shut down again.  Amazingly, with 10 lamps per sensor a 90% run time reduction could be achieved if the lamps only fired for a minute.  10 lamps per sensor is probably as sparsely as you’d want to space the sensors to make sure they fired when there was movement 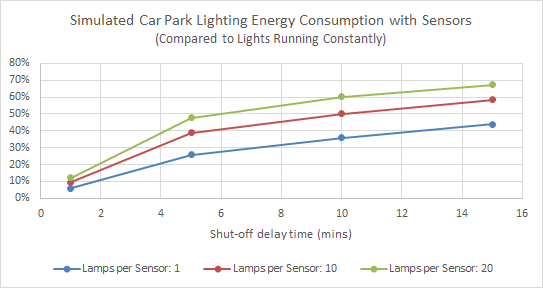 The simulation is obviously not a real live thing so I want to note some possible pit falls.

Although motion sensors in car parks are an absolute no-brainer, there are also other things that can be done to make car park lighting smarter, a few of which I’ll include below.

Lux sensors may also be utilised with dimmable lamps to ensure light levels over the requirements are not delivered and hence energy savings may be achieved due to lower average lamp power.  The benefit of lux sensors in underground car parks is limited however due to a lack of natural light.

A better coefficient of utilisation can be achieved with light coloured rooms (more reflectance, so better light utilisation from your lamps which means you’ll need less lamps).

The lamp itself should be considered carefully and in conjunction with the lighting controls.  The most efficient globe in the world may be the wrong choice if you need more of them than necessary.  Similarly, if it won’t handle being turned on and off all the time, that’s going to be a problem.

The light housing can also help if it’s got a nice reflective backing to disperse the light where it’s needed (down and sideways) instead of where it’s not (up).